The Tibet Relief Fund, the charitable arm of the Tibet Society, was the first charity to support the Tibetan people in exile. 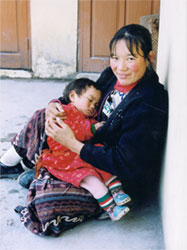 Mother and toddler at the Reception Centre, Dharamsala. © Shari Ravensdale

In 1959, with Tibetans fleeing their country with few possessions, the need for support was quickly established. Many were destitute soon after arriving in exile. Because Tibet was not recognised by the UN as an independent country, Tibetans have never qualified for official aid. In the early years, although small, the Tibet Relief Fund provided valuable support in the form of food, clothing and medical aid.

As well as organising the sponsorship of a thousand Tibetan children and other refugees, the Tibet Relief Fund funds educational, medical, cultural and other projects within Tibetan refugee communities, and also projects within Tibet itself. We consider it vital to support the Tibetan people in exile, so that they will be able to return eventually to their country with the necessary skills and education to run their own affairs.

Working with the Refugee Communities and the Government-in-Exile

There are over 120,000 Tibetan refugees living in 53 settlements in India, Nepal and Bhutan. Over the years, the Tibet Relief Fund has financed £3 million worth of vital projects including: land purchase; capital equipment such as tractors and water tanks; construction and equipping of schools, libraries and medical centres; building renovation; support for Tibet’s culture and handicrafts, vocational training; and the supply of medicine and medical care. These projects are always initiated by the refugee communities themselves or by the Tibetan-Government-in-Exile’s administration at Dharamsala in northern India.

The Tibet Relief Fund acknowledges funding from the National Lottery Charities Board, United Kingdom for project work at the remote Tibetan refugee settlements near Miao and Tezu in north-east India. Each year we produce an Annual Review of our work which gives a broad picture of our work, as well as audited accounts. If you would like a copy of these please email us. The Tibet Relief Fund is a registered charity, number 1061834

Initiatives in urgent need of funding: